trip to a live auction. I followed the advice of my cousin Deb, who owns an estate sale company in Connecticut:

1. Know before you go what you are going to bid on and how much you are willing to pay. Don’t go over that amount in the heat of the moment!

2. Don’t bid straight away because if there are no takers the auctioneer may lower the starting price.

While I didn’t get the amazing laundry/kitchen table from Cork’s Presentation Convent, I did come away with a Victorian roll top desk where I sit writing this post. According to the brass plaque on the front, it was presented to the Reverend Mother Teresa on her Golden Jubilee in 1909. I also got a painting of a woman from the 1960s. I’d love to decorate a wall with quirky portraits. As the auction house is only 20 minutes away, I’m sure we’ll be back for more!

We had a lovely, quiet Christmas with Hughie’s family in Wicklow. It was hard to be away from my family in the states, and I’m used to a much more raucous Christmas Eve. In Ireland, Christmas Eve is usually mass, followed by the pub, which closes at midnight. It’s a great time to celebrate briefly with friends, and hopefully you see them again on St. Stephen’s day (the 26th) which is a holiday here, as well as a big night out in the pubs. Think the night before Thanksgiving in the U.S.

Just after Christmas we got hit hard by Storm Frank. I give him a resounding F*@&! YOU for the flooding we got. We had about two inches of water accumulate quite quickly on the ground floor. Thankfully, our kitchen (aka base of operations) somehow stayed dry. Because we are prepping to renovate, there was no flooring or finished walls to be destroyed. We had to act fast to move some furniture up and out of the water, but largely it was just a big dirty mess. All of the plaster rubble we’ve taken off the walls was on the floor, and is now sodden. The empty boxes and packing materials from unpacking our shipping container got soaked, too. 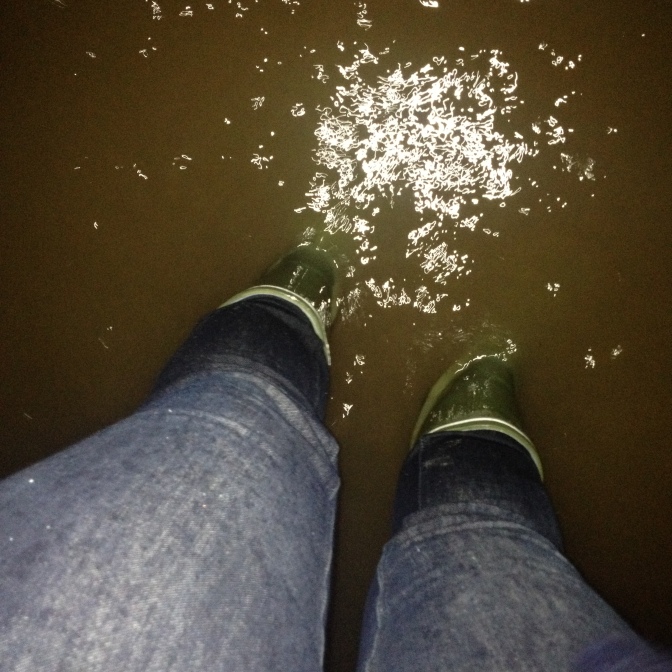 Water above my ankles in the back garden 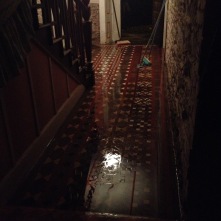 After getting most of the water out

Water nearly breaching the back door

This was an unprecedented amount of rain and the river rose above its banks, enough to potentially cover the drainpipe from the front of the house. The top of the pipe was blocked as well. The back garden flooded about 8 inches, and no one in Killeagh can imagine that ever happening before. A section of the main road to Cork was closed for two weeks as massive pumps tried to clear the water.

That night I was grateful for good neighbors, who helped bail the water out and unblock the drain. Our neighbor Andrew literally came out from behind the bar, armed with his headlamp, a shovel & a broom to give us a hand. He later hopped in his car and returned with sandbags. I was grateful that this happened before renovations, so we can be prepared should this ever happen again. I was grateful that nothing major was damaged. My heart was breaking for the people in neighboring areas who weren’t so fortunate, who had up to three feet of water destroying their homes and businesses.