First, let me say what a fabulous batch of submissions we received this year – especially from poets. We were planning to award only two week-long residencies this year, but in the end we decided to go with three because the work was just that good! The decision-making process was challenging to say the least.

We would like to say a hearty congratulations to the Winter Writing Residency Award Winners:

Aisling Flynn for her short story The House Guest

Aisling is a writer from Bray in Wicklow. She received her MA in Creative Writing from UCD in 2017. This year she was a finalist in the RTÉ Radio 1 Short Story Competition and Lilliput Press Short Fiction Competition. Her work has appeared on RTÉ Radio 1, the HCE Review and the anthology, Bridges Between. She is currently working on a collection of stories. You can listen to The House Guest on RTE here.

Geraldine Clarkson is from the UK Midlands, with roots in the west of Ireland. Her poems have appeared in Poetry, The Poetry Review, Poetry London, Ambit, and The Rialto, and have been broadcast on BBC Radio 3. She has three poetry pamphlets:  Declare  (Shearsman Books, 2016), selected as a Poetry Book Society Pamphlet choice, Dora Incites the Sea-Scribbler to Lament (smith | doorstop, 2016), which was a Laureate’s Choice, and No. 25 (Shearsman Books, 2018). She is a former winner of the Poetry London and Ambit competitions, as well as the Poetry Society Anne Born prize and the Magma Editors’ prize. 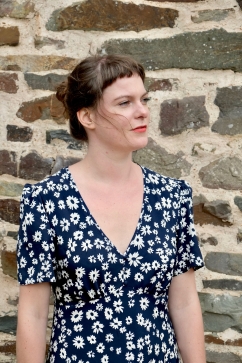 Emily S Cooper is a poet from the North West of Ireland who studied at Goldsmiths, London and the Seamus Heaney Centre in Belfast. She was shortlisted for the Mairtin Crawford Award in 2017 and has been published in The Irish Times, Banshee, Belleville Park Pages and a number of anthologies.

Award decisions were made by the 2017 Winter Writing Residency winners Orla McAlinden, Gráinne Daly, & Mark W. Sasse in conjunction with Greywood Arts, and submissions were read blind.  They all have exciting things like new publications out and a Ph.D. underway, so we would like to thank them for being so generous with their time.

We would also like to acknowledge the great work by the following finalists:

Stay tuned to find out when these three wonderful writers will be in residence at Greywood Arts & be sure to come to their readings in our cosy library. What better way to spend a winter’s eve than listening to wonderful words while sipping a cup of tea or glass of wine?

For anyone curious about the gender breakdown, 86% of submitters were assumed to be female and 14% are thought to be male based on names and email profile photos. Of course, this is not a 100% accurate way of gathering data as we have not asked applicants directly how they prefer to be identified, but we want to contribute to an ethos of transparency and dialogue around gender balance in the arts.