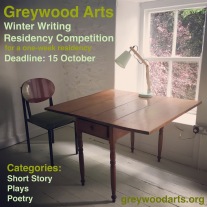 Greywood Arts is delighted to announce the winners of the Winter Writing Residency Competition!

It was a tremendously difficult decision to select only one work from each category – short stories, poems, and plays. It was truly a pleasure to read work by a diverse and talented pool of writers. We look forward to making the writing competition a regular opportunity to win a week-long residency.

We offer a hearty congratulations and warm welcome to:

Gráinne Daly for her poems To Lady and to Tramp, Tomb Raiders, & Slievemore Cemetary

Orla McAlinden for her short story A Sliver of the Moon

Mark W. Sasse for his play The Last Bastion

Each writer will be in residence at Greywood Arts for one week in March or April. The prize includes accommodation and workspace overlooking the Dissour River. At the end of the week, each author is invited to read their work to the community. We can’t wait to see what they do!

You can learn more about them here:

Gráinne Daly is a graduate of Trinity College Dublin and most recently University College Dublin where she graduated with a first class MA in Creative Writing. She was recently shortlisted for the Gregory O’Donoghue International Poetry Prize, Maeve Binchy UCD Travel Award 2017 and Robert Monteith Poetry Prize. Her work came third place in the Anthony Cronin International Poetry Prize and was recently published in Southword Magazine and Pocket Change Journal. A recipient of the South Dublin County Council Artist’s Bursary 2016, Gráinne is currently working on her debut novel and a collection of poetry. Her work is due to appear in an Anthology entitled ‘Letters to my Ex’, and ‘Bridges Between’, which is a collection of new International writing by recent UCD graduates.

She intends to use her time at Greywoods Arts to edit her novel, a crime thriller that sees boundaries crossed between white collar crime and a cartel feud in Dublin. She will also progress her growing poetry collection. Gráinne likes to work on both projects simultaneously, as she finds the poetry is a refuge that helps her restore balance to everything else.

Orla McAlinden is a Pushcart Prize nominee, the Cecil Day Lewis emerging writer 2016, and winner of the BGEIBA Irish Short Story of the Year award. Her debut collection The Accidental Wife won the 2014 Eludia Award from Sowilo Press in Philadelphia, and was published in July 2016.

Other publications include, The Fish Anthology, The Chattahoochee Review, A New Ulster, The Ilanot Review and others. Orla is working on a forthcoming Famine novel The Flight of the Wren set in Kildare, and a second Northern Irish story collection, Full of Grace.

Orla is delighted to be attending the Greywood Arts retreat and will spend the week polishing the stories in Full of Grace, as well as beginning research for a new novel to be set in contemporary Dublin.

Mark W. Sasse: I’m thrilled to be coming to Greywood Arts for the Winter Writing Residency. I am originally from Pittsburgh, Pennsylvania, but I’ve been mainly living overseas for the past 20+ years. I taught English in Vietnam, history & drama in Malaysia, and I’m currently teaching theatre arts in Saudi Arabia. Oh yes, I also write! I’m a playwright and novelist. My plays have been performed in New York, Australia, & Malaysia. I’ve published five novels and am set to release book one of my brand new trilogy. It’s currently being considered for a Kindle Press contract. You can read an exclusive excerpt HERE!

For my residency at Greywood Arts, I have three play-writing projects I’m eager to work on. First, I want to finish an historical play I started recently related to the Nat Turner slave uprising in 1831. Second, I have a new show to write tentatively entitled “Love is…” which will be performed by my new drama troupe, The Sun & Sand Players, in January 2019. Lastly, I have a mostly written play about the cultural clash between religion and gay marriage which has been sitting on the back burner for a number of years. It’s time to get it finished. Knowing me, I’ll probably have some more ideas before I make it to Ireland. Can’t wait. I’m grateful to Greywood Arts for the opportunity.  – Mark W Sasse

Booking is now open for Bealtaine Lantern Making & Make a May Bush Together!